Varndean College student, Justin Nye, strives for yet more success whilst fundraising for the NHS 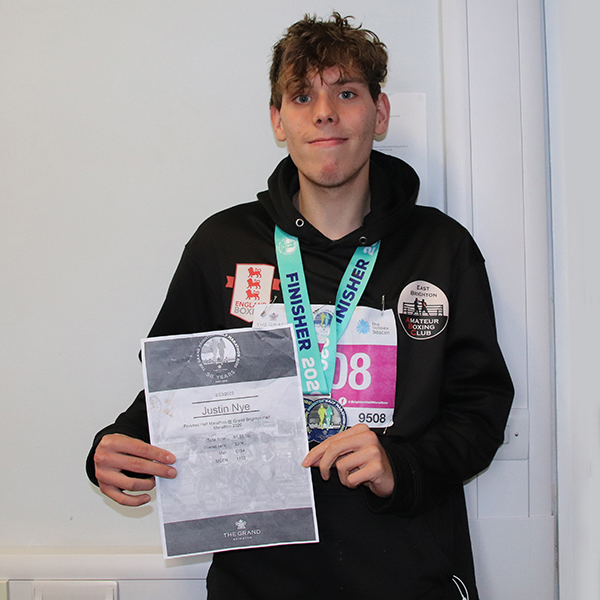 There’s no stopping second year Varndean College student, Justin Nye, who after overcoming much adversity in his personal life, is once again striving for success and raising funds for the Brighton and Sussex University Hospitals NHS charitable funds.

After a long struggle, it was in January that Justin was thrilled to learn that after three retakes he’d finally passed his GCSE Maths exam. Justin, who came to Varndean College from Longhill School to follow a Level 2 programme in 2018, had been struggling to obtain the Grade 4 he needed in Maths, despite having achieved a Grade 5 in English, Grade 4 in Biology and Grade B in his HPQ project. However, after a further year of constant hard work, dedication and support from his tutors, Justin eventually managed to achieve the grade he so badly needed and was finally able to focus on his new Level 3 courses, BTEC Business Studies and Applied Law.

Justin (aged 18), who comes from a family with six older siblings, says that after college he wants to go into criminology or forensics and hopes to eventually follow a foundation degree. He’s already been on several college trips to different law courts and is a regular attendee at the College Politics Society. Next year, while completing a third year at Varndean, he also hopes to add BTEC Applied Biology to his study programme.

Justin is also a very dedicated sportsman and having already obtained a Black Belt in SAMA karate, also last summer came second in the College’s 10k run and in February took part in Brighton’s Half Marathon where he raised £130 for Macmillan Cancer Support. He was also recently awarded his Bronze Award in Amateur Boxing.

Despite the current Covid-19 pandemic however, nothing will stop Justin. During the past seven weeks, since his college was closed and all sport has been suspended, Justin has continued with his daily training by running each day and is now raising money for the NHS by hoping to compete in Brighton’s full Marathon in September. To support Justin, please go to his Just Giving page, https://www.justgiving.com/fundraising/justin-nye3.

Well done Justin, you are a shining example of resilience and hard work paying off. Justin is pictured with his Brighton Half Marathon medal and certificate.